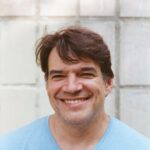 Samurai fans know of Zatoichi, the blind swordsman. Miraluka are the Zaitoichis of the Star Wars universe. There is something about martial arts films that makes blind masters a little more skillful than their sighted peers. Star Wars took that concept one step further and created a whole species of blind, force-wielding martial artists.

Oldtimers like me vividly remember seeing Star Wars: A New Hope in the cinema. Back then, there was no Episode IV and no New Hope. Star Wars was just Star Wars. Luke Skywalker began his Jedi training under Obi-Wan by putting on a visor and using his lightsaber to duel with flying spheres that shot irritatingly painful laser beams.

This sparring session was a foreshadowing of the climactic Battle of Yavin aboard the Death Star. When Luke took his one and only shot at the Deathstar he was the last surviving starfighter inside the Death Star. There would only be one chance.

From beyond the grave, Obi-Wan’s voice uttered the iconic line,

Luke removed his starfighter’s visual screen from view and fired blindly, using the Force. The rest is history.

Miraluka were naturally blind humanoids. They resembled humans in almost every way except for their faces, which had no eyes.

The Star Wars universe has grown a lot since its debut in the 1970s. What started out as one film has turned into many more, including three trilogies. Additional mediums now include novels, graphic novels, comic books, video games, and multiple TV series. All this falls within the category of Star Wars lore.

As George Lucas and his successors continued to make films, mostly sequels and prequels, a problem was created. Sometimes, the reality created in the new movies contradicted the reality that had already been established in Star Wars lore.

For example, before the release of The Force Awakens, Star Wars lore had already established that Luke Skywalker had a son, Ben Skywalker. In that film, however, Luke has no son and later dies in The Last Jedi without having a son. Han and Leia have a son, however: Ben Solo, the future Kylo Ren.

Which reality is the real reality?

The Miraluka, due to their Force-sight, had a natural connection to the Force. Many of them became Jedi, but the Miraluka also had their own Force tradition, Luka Sene. Because of their strong connection to living things, it was almost unheard of for a Miraluka to become a Sith Lord.

Miralukese was their official language, but they certainly learned the common tongue to communicate with other people across the galaxy. They were also capable of cross-breeding with humans and would use some type of covering over their eye sockets in order to not shock people with their appearance.

Miraluka fought in many of the galaxy’s wars, including the Jedi Civil War, the Great Sith War, the Clone Wars, and the Galactic Civil War. Within Star Wars Canon, Visas Marr was the best known, but other famous Mirluka included Shoaneb Culu and Jerec. Their gods included Ashla and Bogan.

Miraluka had a common bond due to their unity with the Force. They are different from other races and, therefore, tend to take care of each other. Due to their Force-sensitive talents, they played pivotal roles at many points in the galaxy’s history. However, when Miraluka populations were decimated due to conflicts with the Sith, the Miraluka had a more isolationist policy.

Alpheridies was the main planet for the Miralukan population. It was not their homeworld. Their homeworld eventually became devoid of resources, so they migrated to a new world.

The Miraluka also had a colony on Katarr, but that is another story.

Katarr, according to legend, was a planet in the Galaxy’s Mid Rim that was colonized by the Miraluka. It was teeming with vegetation and other life, mostly covered by mountains and oceans.

During the Old Republic Era, Darth Nihilus and the Sith Triumvirate were the scourge of the galaxy. The Jedi were not sure that they were strong enough to battle the Sith. They were hoping, however, that if they could at least eliminate one Sith Lord, the other two would fall like dominoes.

Their target was Darth Nihilus. The Jedi decided to have a large meeting, which many of their best knights and masters attended. Their plan was to draw Darth Nihilus to the planet and then use their superior numbers to crush the Sith Lord once and for all.

Like so many wonderful Jedi plans, this one didn’t turn out so well.

Darth Nihilus was waiting for the Jedi. Instead of fighting them, he “drank” them. The Sith Lord unleashed some powerful dark force energy and sucked the life from every living thing on the planet, Jedi and Miraluka alike, in the year 3952 BBY.

The only living thing on the Katarr that was spared by Darth Nihilus was the Miraluka Visas Marr.

Prossett Dibs was a male Miraluka who became a Jedi Knight. His fighting style was unusual in that instead of using a traditional lightsaber he chose to use twin shoto. Shoto are the lightsaber equivalent of shortswords normally reserved for Yoda-sized Jedi.

Dibs was sent on a mission to planet Hissrich with Jedi Master Mace Windu. While on Hissrich, Dibs witnessed the destruction and death caused by the Republic’s war with the CIS (Confederacy of Independent Systems).

While some may argue that this was a necessary sacrifice and the lesser of two evils, Dibs did not see it that way. He felt that Windu and the other Jedi were using civilian populations across the galaxy as pawns in their game for power. His answer was to betray Windu and attempt to kill him.

Ultimately, however, Dibs was defeated by Windu. Windu had the legal right to have Dibs executed for betraying the Jedi, but instead chose to have him rehabilitated. Windu probably showed clemency because the Jedi Master empathized with Dibs. He knew that Dibs believed that he was acting on the side of good.

With the fall of the Republic and the Great Jedi Purge brought about by Order 66, Prossett Dibs was no longer subject to the mercy of the Jedi Council. He was spared death not once, but twice: once by being pardoned from execution by Windu and another time by escaping Order 66 due to no longer being a member of the Jedi Council.

Dibs could have seized his newfound freedom and made the most of the life he could have so easily lost. Instead, the Miraluka Fallen Jedi chose another path. He allowed the Galactic Empire to transform him from a Fallen Jedi into an Inquisitor. As a member of the Inquisitorium, his mission was to hunt down any Jedi that survived Order 66. When he joined the Inquisitorium, Dibs became an agent of Darth Sidious and would become known from then on as Tenth Brother.

As they say in baseball, three strikes and you’re out. Death’s third strike came for Tenth Brother on planet Mon Cala. Darth Vader landed on Mon Cala with Tenth Brother and two other Inquisitors: Sixth Brother and Ninth Sister. They were accompanied by a contingent of elite clone troopers, Purge Troopers. Their mission was to hunt down Padawan Ferren Barr, a survivor of Order 66.

Their pursuit led to a battle against the planet’s population, Mon Calamari, squid-like humanoids. The Inquisitors became separated from their Sith Lord but eventually tracked down Barr after fighting their way through five of his six disciples.

Barr had a trick up his sleeve waiting for Tenth Brother and his colleagues, however. The Padawan confronted the Fallen Jedi with their Jedi past, saying that they would always be Jedi. Ninth Sister, on behalf of her fellow Inquisitors, renounced their Jedi past.

The clone Purge Troopers standing behind her didn’t see it that way. Once a Jedi, always a Jedi. Using a Jedi mind trick, Barr activated Order 66. The clones opened fire.

Ninth Sister and Sixth Brother survived the initial onslaught, but Tenth Brother did not. It was an ironic end for a Miraluka with so much potential. He didn’t want to be a tool for the Republic and the Jedi, so he became a tool for the Sith and was executed by other tools for the Sith that were being used as tools by the Jedi. Just like so many things of the Force, it all went full circle.

Visas Marr was a Miraluka female on the planet Katarr. Unlike most Miraluka, Marr had dark hair.

In 3952 BBY, Marr was the sole survivor of the extermination of all life on that plant by the Sith Lord, Darth Nihilus. In exchange for life, Marr became his servant and apprentice.

On the orders of Nihilus, Marr traveled beyond known space and met and fought against the Jedi General Meetra Surik. Surik defeated Marr and spared the life of the Miraluka. Marr, in turn, forsook the dark side and became Meetra’s Padawan.

Eventually, Surik, Marr, and other companions were able to confront Darth Nihilus on his ship, the Ravager, and slay the Sith Lord. Ultimately, they defeated the other two members of the Sith Triumvirate: Darth Traya and Darth Sion. Together, Surik and Marr rebuilt the decimated Jedi.

Question: Were there any notable Miraluka-human offspring?

Question: Was Chirrut Imwe from Star Wars: Rogue One a Miraluka?

Answer: No. Chirrut Imwe visibly had eyes, so he could not be a Miraluka. He was a Force-sensitive human who happened to be blind. He probably did, however, have Force-sight.

Question: How many Miraluka does it take to screw in a light bulb?

Answer: None. They don’t use light bulbs because they have Force-sight. They are very intelligent, however, so it only takes one Miraluka to screw in a Force bulb.

The Miraluka were a blind, Force-sensitve species of near-humans that could see in other ways. Their force-sight enabled them to detect things that other creatures with ocular vision could not.

Deep understanding doesn’t always bring happiness, however. When you look at the stories of notable Miraluka, there rarely is a happy ending. A Miraluka story doesn’t tend to go, “Blind girl meets blind boy, has Force-sensitve children, and lives happily ever after.”

Like all power, their deep understanding of the Force came at a price. Power attracts power. The innate power attracted Jedi and Sith alike. Unfortunately, the Miraluka were constantly drawn into this struggle between the dark and light sides of the Force, and the most destructive clash happened right in their backyard on the colony of Katarr. A more typical Miraluka love story would go, “Blind girl meets blind boy. Before they could plan a life together, Force-sucking Sith Lord drains the entire planet of every spark of life. Now, blind girl listens to the wind and talks to Force ghosts.”

What does this say about our world IRL (in real life)? Does limitless potential attract tragedy? In Greek mythology, it did, but does it have to be that way? Maybe a Star Wars writer will change things for Miraluka. Maybe we’ll get to meet a nice, normal Miraluka family and have nothing bad happen to them.

I’m not optimistic, however. As Darth Sidious and others have proven time and time again, the Sith can be defeated but never destroyed. The name of the franchise is Star Wars, not Star Peace.