Skip to content
Ben Kitchen
Ben is an author and writer with a love for shaping the English language He grew up watching the first six Star Wars films and from the age of 5 has been hooked by the complicated interweaving story arcs initially sculpted by George Lucas. Outside of working hours, you can find him visiting friends, working on his car, or blasting around a karting track. Of course, he also rarely passes a week without watching or playing something Star Wars-related.
Latest posts by Ben Kitchen (see all)

As a character first introduced in the video game Jedi: Fallen Order, Jaro Tapal is a fascinating addition to the Star Wars universe. As the Lasat Master of young Padawan Cal Kestis, he is a highly disciplined but intensely powerful Jedi with a solid connection to the Force.

He would protect the young boy as he tried to escape from the brainwashed clones trying to kill them, ultimately giving him his life to save him during Order 66.

Cal continues to live his life hiding on Bracca as the Sith Inquisitors search for the last remaining Jedi. As he tries to honor his old Master, he feels a mixture of awe, respect, and fear of letting him down.

On this page, I’ll be exploring a bio of Jaro Tapal, including his impact on the broader story of the Clone Wars, Order 66, and his young apprentice, Cal. Jaro Tapal was a Lasat Jedi Master, serving the Republic during the Clone Wars as a Jedi General. He commanded clone troopers of the 13th Battalion and developed a good relationship with fellow Jedi Cere Junda, a Knight.

As the Clone Wars drew towards an end (unbeknownst to the Jedi Master), Tapal and Kestis were sent to Bracca. Here, they were to assist with repelling the Bracca Invasion, a Separatist plot to overthrow the Republic’s presence on the planet with help from some members of the Scrapper Guild.

After successfully dealing with the Bracca Invasion, they were ordered to redeploy to Mygeeto and assist Jedi General Ki-Adi-Mundi. At this moment, the infamous Order 66 came through from Sith Lord Darth Sidious, declaring the Jedi to be enemies of the Republic and demanding their immediate, trialless executions.

When Order 66 was issued, it activated the clones’ inhibitor chips and forced them to turn on their Jedi commanders and friends. Above the planet Bracca, Tapal clutched his head, feeling the pain and terror across the galaxy in that single moment. He turned on his troopers before they could execute him and Kestis, ordering the young Jedi to escape the ship through the ventilation to keep him safe. At the same time, he would take the clones on directly.

His plan to escape was almost successful, but eventually, overwhelming firepower from the clone blasters hit him, mortally wounding him. In the last moments of his life, he told Cal to escape and hide until he heard from the Jedi High Council, handing him his lightsaber. Most importantly, he told him to “trust only in the Force.”

Cal would live in hiding for five years but eventually came to honor his old Master through attempting to restore the Jedi Order to its former glory. All the key moments of Jaro Tapal’s life – and the little we know about it – come in Star Wars Jedi: Fallen Order. Tapal had a strong connection to the Force. His techniques unashamedly focused on self-discipline. He wasn’t known for his patience, with clone troopers often telling Kestis to hurry up and not to keep them waiting. During his apprentice’s training, which had to be carried out on Star Destroyers far away from Coruscant, he had no qualms about scolding Cal.

Spartan though he may have appeared, Jaro was a kind-hearted Jedi and more faithful to the Order’s beliefs than many others had become in those times. He would explain to his Padawan that while the Jedi should never seek violence, they must also always be ready to answer it. Tapal valued persistence – a trait he no doubt had to develop in himself to master the self-discipline he required.

When Cal struggled in training, as he often did, he would tell him to embrace his failures rather than mask them because of his pride and ego. This comes in stark contrast to the Jedi Council, who refrained from telling the Senate that their “ability to use the Force [had] weakened” (Mace Windu in Attack of the Clones).

As a Lasat, he was extremely tall and physically strong, an aspect he would use while escaping Order 66. I can easily understand why Junda would later describe him as “a true guardian of the Republic”.

In terms of Force abilities, Jaro was exceptionally skilled in mighty telekinesis powers. When escaping from the clone troopers, he used these to full effect, slamming clone troopers into objects and hurling them around like ragdolls. Even after being fatally hit, he could still draw on the Force, a testament to his self-discipline and intensely strong Force connection. He also had a robust connection to the cosmic Force and could sense Order 66 happening across the galaxy. This was an ability that many Jedi were not proficient enough in the Force to feel, as evidenced by the fact that hardly any of them realized what was happening. Yoda, clutching his heart, felt the wave of tragedy spiral throughout the galaxy, and Ben Kenobi, at the destruction of Alderaan, were two of the only Jedi to show this trait.

On top of his Force powers, Jaro was highly skilled with a double-bladed lightsaber, which he used to deadly effect when confronted by clone troopers in 19 BBY. He used it to carve a path for himself as Kestis escaped through the ventilation system. Used for both offensive slashes and defensive blaster bolt deflection, he could hold his own against many opponents. Eventually, cornered and with nowhere to go where he could protect Cal, he was overwhelmed by sheer blaster fire.

His true personality would be laid bare at the end of his life, as he died protecting Cal from the clones. With his last breaths, he told him to trust the Force. This was a motivating factor that the boy would eventually use to escape Sith Inquisitors, meet up with fellow Jedi and rebels, and begin to rebuild the Order. One of Jaro Tapal’s most important relationships was with Cal Kestis, his Jedi apprentice. Cal was taught to develop his connection to the Force through Tapal’s methods and mindsets as his Padawan learner.

The two shared a deep bond, culminating in Jaro giving his life for Kestis. Cal would continue to be haunted by dreams and visions of his perceived failure to protect his Master. Instead, he often viewed himself as a burden, lacking all forms of self-belief. As the boy grew with the help of new friends, he came to realize that his Master had died as a true Jedi should, protecting the innocent and maintaining the Order in its proper, uncorrupted form. He would then use that strength to let go of the past and overcome his fears, strengthening his connection to the Force and trying to start rebuilding the Order. 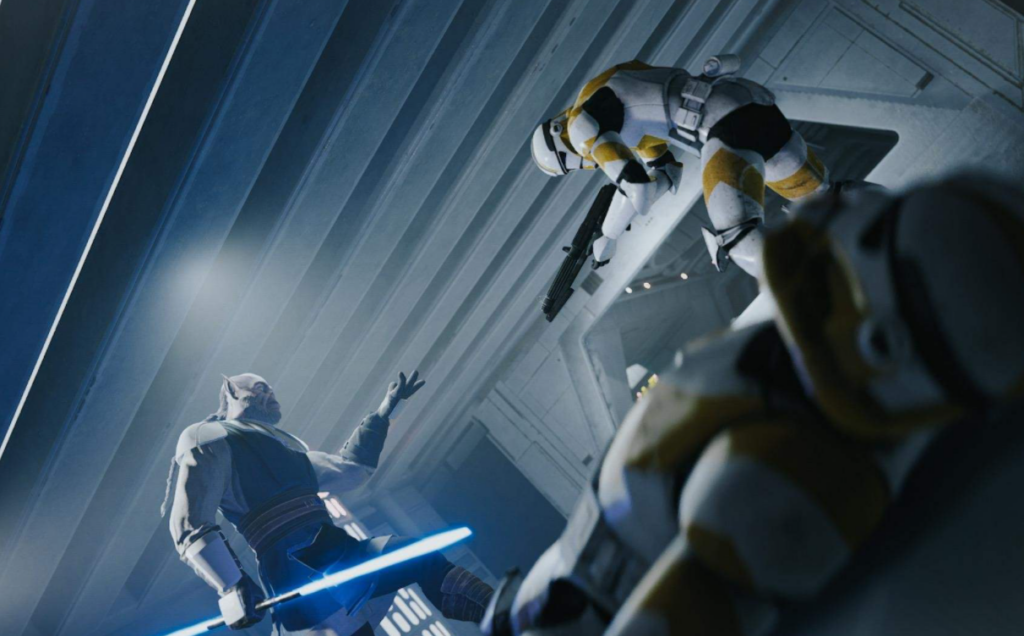 Yes, the path is difficult. It may seem impossible, but with persistence and the Force as your ally, you will overcome obstacle. You will master any path.

The Jedi do not seek aggression, but we stand against it. The Force is there to shield us. The obstacles in your path define the path. What stands in the way becomes the way.

To Cal Kestis about the Force:

There will be times when emotion, pain, or exhaustion will trick you. You will feel cut off, isolated. This is an illusion.

On your way to training?

Alright then, I’ll see you later… Better get a move on, Cal; Jaro isn’t a patient one.

Reach our position. And do not keep me waiting.

To Cal Kestis, after telling the clone commander to fire harmless rounds at him during training:

Focus. Were you concentrating, you would have anticipated this distraction.

To Cal Kestis at the moment when Order 66 was issued:

You must… *clutches his head and gasps*

Master? Are you okay?

*Clone commander raises his blaster to point at Tapal’s back* No! No! *Jaro kills the clone* What’s happening? Why did the commander just…?

Padawan, something terrible is happening. The clones have betrayed us. There are no answers to your questions, not yet. We need to get off this ship. Quickly.

To Cal Kestis during their escape:

I will create a distraction and meet you. If I am not there when you arrive, depart without me. I will find you on Bracca. Do you understand?

Cal. Cal. I overloaded the ship’s reactors. The explosion will mask our escape. This war is not over, my Padawan. Hold the line. Wait for the Jedi Council’s signal. *hands him his lightsaber* Remember, trust only in the Force.

Answer: The clone commander who befriends Cal and loyally serves Jaro Tapal isn’t named. Not yet, at least.
Jedi: Fallen Order doesn’t particularly delve into the Clone Wars since it focuses on the “fallen” Jedi Order and Cal’s journey to start rebuilding it. However, it gives a small indication of the Jedi’s close relationships with their soldiers, especially considering the number of children on the frontlines as Padawans. The clones clearly developed attachments to them.
When the clone commander, whatever his name turns out to be, betrays Tapal and Kestis, he is being brainwashed by the inhibitor chips, as detailed in The Clone Wars. His actions should be viewed as tragedy rather than scoffed at since he wasn’t in control of himself. The actions of Sidious left Master Jaro no choice other than to execute him and most of his men.
The tragedy of Order 66 is best delved into at the end of The Clone Wars Season 7.

Question: What race is Jaro Tapal?

Answer: Jedi Master Jaro Tapal, as featured in Star Wars Jedi: Fallen Order, is a Lasat.
The Lasat are native to Lira San, although many settled on the planet Lasan in the Outer Rim. Another notable Lasat in Star Wars is Garazeb “Zeb” Orrelios, from Star Wars: Rebels.
Like almost all Jedi, it’s reasonable to assume that Jaro was taken from his family as a young child or baby and raised on Coruscant at the Jedi Temple.
The concept for the species, first shown in Zeb from Rebels, was original concept art for the character that became Chewbacca.

Question: Can you refuse to fight Jaro Tapal?

Answer: In Star Wars: Jedi Fallen Order, a vision of Master Jaro Tapal appears to Cal Kestis.
It is possible to avoid fighting it at first, but you will need to eventually to progress.
The vision itself is symbolic of Cal’s inner turmoil. He’s spent his whole life since Order 66 fighting that challenging memory, suppressing it and avoiding it. In his vision, he will realize that he can’t fight the past. To do so would potentially lead to the Dark Side through fear (as Yoda famously tells a young Anakin). He must simply accept it and learn from it, moving on.
There’s some nice symmetry here. One of the things that Jaro Tapal instills in Cal is the ability to look past his own ego and pride to overcome the hindrances in his way. He also talks about how the obstacles define the path, making it what it is. By applying his Master’s teaching, Kestis is eventually able to face and overcome his haunting fears of the past, which defines him as he moves forward.

Overall, Jaro Tapal was undoubtedly a strong, intimidating, and strict Jedi, but he was also kind, caring, self-sacrificial, and a true leader.

When he gave his life for Cal, it showed that his instructions and teachings were not mere words but that he lived by them too. That is surely a lesson for anyone, fictional or not.

For more interesting readings check out: