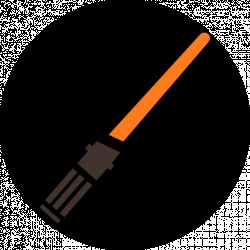 Lightsabers are considered one of, if not the most iconic weapons across pop culture in the past almost fifty years. And rightly so, no other fantasy weapon even comes close to what the lightsaber represents.

Lightsabers are no longer just Purple weapons. They are considered the face of Star Wars, and no matter where they appear, they are instantly linked to the movies.

But lightsabers aren’t just known because of how iconic they are to people outside the fandom but are also an intriguing part of the lore of Star Wars itself. Over the years, fans of the franchise, both old and new, have been trying to uncover this iconic weapon’s secrets.

And even in the multitudes of lightsabers out there, one color has always stood out in the Galaxy Far Far Away. We are, of course, talking about the indigo slash purple lightsaber wielded by none other than Samuel L Jackson in his portrayal of Mace Windu.

The Purple lightsaber wielded by this particular Jedi Master has been a source of controversy since its introduction. The fandom has never truly settled on what the color means or represents.

Alas, fear not, my young Padawans; I have scoured every bit of Star Wars media I could find to help you understand everything you need to know about Purple lightsabers.

When was the Purple Lightsaber First Introduced?

Despite what most fans know, Mace Windu was not the first major Star Wars character to wield the coveted indigo blade.

It was back in 1991 when the first book in the Thrawn Trilogy came out. In the events of Heir To The Empire, we were introduced to Mara Jade. Then serving as Hand of the Emperor (Palpatine obviously, who else?), Mara was given a special Kyber Crystal by Palpatine and constructed her first lightsaber, which was shown to have a magenta/purple blade.

And even though her appearance is now considered non-canon, and that Mara Jade Skywalker doesn’t exist anymore, this marked the first instance of a purple lightsaber being featured in the Star Wars Universe.

In the New Canon

The first time Mace Windu ignited his Purple lightsaber on the battlefield at Geonosis is a moment in Star Wars that fans can seldom forget.

Samuel L. Jackson has always had a thing for badass entrances as whatever character he is playing. The same held when the Jedi Grandmaster stepped out of the shadows to threaten Count Dooku as Obi-Wan and Anakin were being used to entertain the crowds in the Geonosian Arena.

Mace Windu’s arrival on screen was soon followed by him, along with the Jedi he brought with him, being forced into the center of the arena and surrounded by battle droids. It was here that fans saw Windu ignite his purple lightsaber for the first time and assume a defensive position.

We continued to see the indigo blade in action until the beheading of Jango Fett at the hands of the Jedi Master and the arrival of Master Yoda with the Clone Army.

The Making of the Purple Lightsaber

While the Purple lightsaber is still technically a normal lightsaber except for the color of its blade, there has always been something inherently different about it.

The blade has always been unique in more than just its color. It’s been rare throughout the Galaxy and has been iconically attached to Mace Windu.

The Jedi Master has been one of three people in the history of Star Wars to wield a purple lightsaber. Through his journey to build his weapon, we found out why this particular iteration of the lightsaber is built differently than the other versions.

When Windu was ready to become a Jedi Knight and build his first lightsaber, he traveled to the Crystal Caves on Ilum but returned empty-handed when none of the Kyber Crystals in the cave called to him.

Defeated and searching for alternatives, Windu was sent on a diplomatic peace mission to the planet Hurikane. As a gift for helping them, Windu was then given the Hurrikane Crystal by the rocky-skinned natives of the planet.

The crystal closely resembled an amethyst, and a part of it was used by Windu to create his lightsaber. The remaining crystal was then stored in the Jedi Archives and would later be used to construct Windu’s second lightsaber.

The crystal was also renamed “Windu’s Guile” after this series of events and in respect of the Jedi Master.

It is also rumored that the “special crystal” given to Mara Jade by the resurrected clone of Emperor Palpatine was also a shard of the same crystal.

What do Purple Lightsabers Mean?

As it is with all the other lightsaber colors, the lore surrounding the purple lightsaber blade and what it means was significantly reduced when Disney acquired Star Wars and declared the Extended Universe as non-canon.

This particular color of the lightsaber was extremely rare in and of itself, even in Star Wars: Legends. There have only been three recorded instances of a Force User wielding a Purple lightsaber throughout Legends and the New Canon combined.

So what exactly does the Purple lightsaber represent?

When Disney acquired Lucasfilm (and with it, Star Wars), it retconned what was known as the Star Wars Extended Universe. The EU consisted of a storytelling arc that dated as far as back as the creation of the first lightsaber and as far forward as the death of Luke Skywalker.

There were two Purple lightsaber wielders other than Mace Windu in these stories.

Darth Revan was a Dark Lord of the Sith who was known for first creating the Sith Empire and waging war against the Jedi, but then losing his memory and joining the Jedi to fight against the army he had created.

The second, Mara Jade Skywalker, was an assassin trained by Darth Sidious. While initially being a servant of the Dark Side, Mara eventually shifted to the light and married Luke Skywalker.

Finally, Mace Windu was a more fleshed-out character in the Legends Canon. His journey was expanded on, and more of his adventures were highlighted in the comics.

The general pattern across all three users was how they served both the Light Side and the Dark Side of the Force.

So, a solid assumption from this is that users of the Purple lightsaber walk the line between the Light Side and the Dark Side of the Force very casually but still understand the difference between the two.

In the New Canon, the meanings behind lightsabers are relatively simplistic. They don’t signify much in the way of the personalities and attributes of their wielders. Nevertheless, the explanation offered in the New Canon is based solely on Mace Windu and his usage of the weapon. Given this, we’d say it is pretty accurate in what it says.

The theory is relatively simplistic in its understanding of lightsabers. (one could even go as far as to say that it is nothing more than simple color theory applied to Star Wars).

The logic goes that Mace Windu is a user of the Seventh Form known as “Vapaad.” Vapaad is singlehandedly the most dangerous combat form, given that it requires the user to harness the power of the Dark Side of the Force to enhance their lightsaber skills.

Given that just three individuals used the Purple lightsaber throughout all of Star Wars, this is just a list of the three in order of importance.

Mace Windu was a Jedi Master during the time of the Galactic Republic. Known throughout the Galaxy for his unrivaled swordsmanship, Windu was a force (pun intended) to be reckoned with on any battlefield.

Windu was easily recognized for his iconic Purple lightsaber and was respected by every Jedi in the Order due to his mastery of Vapaad.

His skills with a lightsaber led him to many a victory in the time of the Clone Wars and even allowed him to stand toe-to-toe with Darth Sidious at the end of Star Wars Episode III: Revenge of The Sith.

Given what the Purple lightsaber represents, it’s only right that a Dark Lord of the Sith is on this list.

Darth Revan was an ancient Sith Lord born before even the Rule of Two was established and was responsible for forming the Sith Order and making an army that waged a massive war on the Jedi.

Revan wielded two lightsabers, a Red lightsaber to signify his allegiance to the Sith and a Purple one to show his former association with the Jedi Order.

Ironic as his fate was, Revan eventually suffered from amnesia and was re-inducted into the Jedi Order.

It was then that he switched sides and fought with the Jedi against the Sith Order that he had created with only his Purple lightsaber.

The third and final user of a Purple lightsaber is a Force User that falls into the same category as Darth Revan in terms of characters that Disney retconned during its acquisition of Star Wars.

Mara Jade was introduced in the Thrawn Trilogy as the Hand of the Emperor, an assassin who carried out missions for a resurrected clone of Emperor Palpatine. The Emperor gave her a special lightsaber crystal to signify her allegiance to him. When used to construct Mara’s lightsaber, this crystal produced a purple blade.

Her fate eventually aligned itself with what the Purple lightsaber represents when she fell in love with Luke Skywalker, married him, and turned to the Light Side of the Force.

Question: Is Mace Windu the Only Purple Lightsaber User?

Answer: No. While Windu is definitely the only Jedi in recorded history that has ever wielded a Purple lightsaber, he is not the only person who has. Two other Force Users, Darth Revan and Mara Jade have also used purple-colored blades.

Answer: No, Purple lightsabers are still normal lightsabers. Unlike the Ghostfire Crystal or the Kaiburr Crystal, purple Kyber Crystals give no special abilities or boosts to the lightsaber or its user.

Question: How did Mace Windu get a Purple Lightsaber?

Answer: While the answer from inside the Star Wars Universe is given above, the actual reason behind Windu’s unique blade comes from Samuel L. Jackson simply asking George Lucas if he could have a differently colored lightsaber.

To wrap up, the Purple lightsaber is truly unique in the wide variety of lightsabers in the Star Wars universe.

Whether that is because of the unique lore surrounding it, how rare it is, or even just because of how Samuel L. Jackson literally asked for it and got it is something for you to decide.